Kakadu plum may give cancer protection 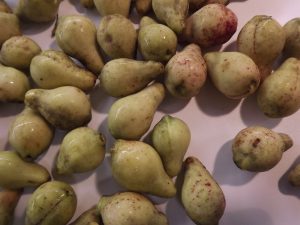 In what could be a major medical breakthrough, an Australian native fruit has been found to offer possible protection against cancer and a host of other diseases.

The Kakadu plum (Terminalia ferdinandiana) has impressive potential for protection against cancer, arthritis, neuro-degenerative diseases and diabetes, according to Dr Ian Cock of the School of Biomolecular and Physical Sciences at Griffith University.

He says the Kakadu plum has the highest source of Vitamin C in the world plus anti-oxidants, and has anti-inflammatory, anti-fungal, anti-bacterial, and anti-neurodegenerative properties.

“There are multiple links between inflammation and cancer, body fungus and cancer,” he said.

“When our anti-oxidant stress gets too high either from fungus, environmental or chemical toxins, the body cannot handle this and the loading of oxidative stress leads to diseased states.

“When the body is handling it with its own oxidative mechanisms or given anti-oxidants this then leads to the body managing these high stressed states.”

He said the Kakadu plum offered the mechanism to overcome these disorders with its outstanding bio-activities.

“If you have an unhealthy lifestyle it will not get rid of the problem but it will reduce the problem,” he said.

Dr Cock said it was a potent plum, lime in colour and with a flavour between a lemon and a plum.

He said Australia’s indigenous people had used this and other “superfoods” for thousands of years. Scientists were only now researching the extraordinary regenerative values of these wilderness superfoods for the health of the human body.

Mr Boehme is arranging co-operative management agreements with indigenous people in the region.

One Response to “Kakadu plum may give cancer protection”