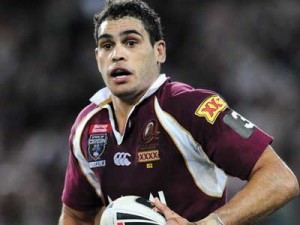 Queensland won the first game of the 2012 State of Origin series in a thrilling but controversial 18 to 10 win over New South Wales in Melbourne last night.

A full house of 56,000 fans packed Etihad stadium to witness rugby league at its toughest level.

NSW started the game well scoring in the 6th minute but a failed conversion attempt from Todd Carney was one of the turning points of the match.

Crucial errors from king fullback Billy Slater gave NSW some good scoring opportunities but they couldn’t turn them into points.

A comedy of errors followed for NSW when centre Michael Jennings joined in a brawl and was given ten minutes in the bin to the disgust of captain Paul Gallen.

“This is your first Origin – it’s different you know,” Gallen said angrily to referee Matt Cecchin.

A few minutes later Todd Carney failed to find touch off the back of a penalty.

Queensland’s domination on the wings and Brent Tate’s confidence under the high ball started the momentum for Queensland to fight back.

Slater made up for the mistakes later on with some dynamic line breaks and try saving tackles.

A controversial try awarded by the video referee to Greg Inglis in the dying stages of the match assured Queensland a win but left NSW skipper Gallen furious.

“How the hell is that a try?” he demanded of the referee.

That try made Greg Inglis the greatest try-scorer in Origin at just 25 years of age with his 13th try.

NSW’s performance has improved following from last year’s two-one defeat but they still have a lot of work to do if they’re to stand any chance against the mighty Maroons on June 13 in Sydney.