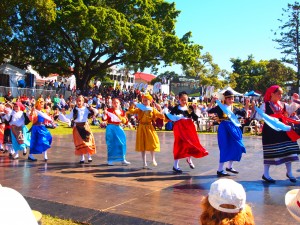 After being forcibly removed from Musgrave Park last week to make way for the annual Paniyiri Festival, Aboriginal protestors today joined in celebrations with the Greek community.

Indigenous dancers gave a Welcome to Country ceremony to show that their quarrel was with local and state government, not the festival organisers.

More than 200 police forced the dismantling of Musgrave Park’s tent embassy on Wednesday, resulting in 31 arrests.

But today and yesterday tens of thousands of people flocked to the South Brisbane park for the celebrations, and by the end of the day there was very little room left for people to move.

One participant, Hannah, said she loved the colour and vibrancy of the festival, and felt moved by the inclusion of indigenous groups.

“It was so moving that they were able to do something like that,” she said.

Greek Club member Richard Greer said that there were no problems from the protestors during the festival.

“The Aboriginal protestors were set up in an area of the park and were respectful to Greek community which I believe the Greek community appreciated and therefore respected their cultural beliefs as well,” he said.

Concerns after last week’s conflict that people would avoid Paniyiri were unfounded, and Mr Greer said the festival was a great success.

“Our store was constantly packed with people wanting our Greek cuisine,” he said.

“We actually started running out of foods at around midday which always mean we had some success, and there was probably thousands of people that entered the festival today.”

He also said that there hadn’t been much talk of the Greek financial crisis and that people just want to celebrate their culture without worrying.

“The atmosphere amongst the whole festival was positive with a lot of music and dancing throughout the day. Therefore no one was dwelling on negatives,” he said.

“I think the Greek culture and community is one that people should become interested in as the community is like one big family.”

The festival included Greek dancing with the stars, grape stomping, grape and honey puff eating competitions and performances from Greek dancers and singers.