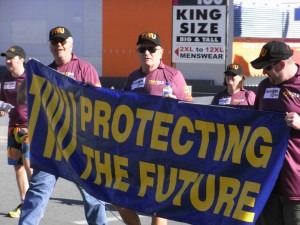 With flags fluttering and to the bagpipe strains of “Hills Of Argyle”, the Gold Coast Labor Day march set off this morning from outside the Southport Workers’ Club.

After a tough 12 months dealing with issues like the health payroll crisis, the Queensland Nurses’ Union led the cavalcade along Scarborough Street to the Broadwater Parklands.

Chants of “state schools, great schools” and “the workers united will never be defeated” filled the sunny autumn air, as union members and their families celebrated their movement’s achievements.

“Unless we’re careful we’ll find ourselves back where we were 100 years ago, working 12 to 14 hour days,” he said.

Attending his first march, United Voice union member Christopher White said it was a chance to get together and put the other point of view that life isn’t only about work.

“We’ve got to get back to communities working for human beings instead of humans being robots working for corporations,” he said.

Other unions represented included the Builders Labourer’s Federation – “Give us a B, give us an L, give us an F. Who are we? BLF!” – and the Plumbers Union, their motto Our Pipelines Are Your Lifelines.

Sporting a t-shirt with a quote from Burmese dissident Aung San Suu Kyi – “Fear is not the natural state of civilised people” – Ms West said fear of speaking out in Queensland was “a holdover from the Bjelke-Petersen years”.

Mr Karatas said Labor Day was also about protecting human rights, particularly the rights of asylum seekers who he said shouldn’t be kept behind bars “as if they were criminals”.

“Young people don’t realise workers and unions had to fight for better pay and conditions.”

Mr Hanna said new Gold Coast Mayor Tom Tate “will get things moving”, so construction workers would no longer need to leave their families to work in the mines.

“A highlight for me today is singing Solidarity Forever,” she said.

Its melody taken from the Battle Hymn of the Republic, “Solidarity Forever” was the first cab off the rank as the morning’s entertainment got underway, the beers went down, and the barbeques fired up.