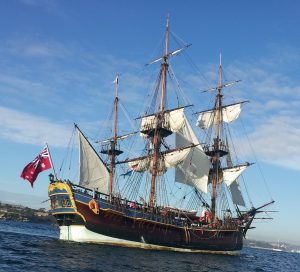 Leading a parade of sails across Sydney Harbour, HMB Endeavour returned home on Monday after her first circumnavigation of Australia.

Startling sea-gulls, she fired her cannon in salute under Sydney Harbour Bridge and again as she docked at the Australian National Maritime Museum in Darling Harbour.

The ship sailed more than 13,000 nautical miles, with more than 700 voyage crew in addition to a core professional crew, Mr Sumption said.

Captain Ross Matson took a message of friendship and reconciliation to remote and regional communities around Australia.

He said message sticks of friendship and recognition from Sydney indigenous elder Uncle Max Eulo and the Tribal Warrior Association were passed to traditional owners of visited ports.

Captain Matson gave a message stick to Uncle Max during Endeavour‘s welcome home ceremony. He praised the 34 indigenous Australians who had trained as voyage crew.

James Clark, 20, who crewed from Thursday Island to his home town of Darwin, was thrilled to be the first of his friends to go out to sea. 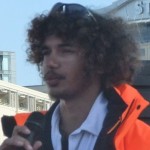 “[It was my] first time ever in Queensland: different water colours, totally different landscapes to what we normally see in the Northern Territory,” he said.

“At Croker Island, we got to see all the young indigenous kids. They were all looking up to us. [This] just made us proud to be indigenous.”

Since the voyage James has completed his coxswain’s certificate and will work towards his Master V certificate.

His advice to all is: “Don’t be afraid: just go out and do it, and don’t let the seasickness scare you.”

At most ports Endeavour became a temporary floating museum of Captain Cook’s voyage to the Pacific and Australia in 1768-71.

Thousands of school children and public viewed hammocks slung for a night’s rest, botanical specimens and charts in the Great Cabin, and heard thrilling tales of sailors, scientists and marines.

“I knew the ship was an icon and an attraction, but I didn’t expect to have all those visitors,” circumnavigation project manager Trish Pascuzzo said.

To manage the crowds who sometimes queued up to three hours, she needed to remind volunteer tour guides “who loved the ship so much … to keep the spiel to a minimum”.

His truck carried the museum items and he was responsible for general preparations such as power, water and placement of gangways at each port.

Mr Lockington said: “It’s amazing the truck has been around the country but doesn’t have a scratch on it. No breakdowns – just a broken windscreen.

“Each port was different and had its challenges, but we succeeded at every port.”

One Response to “Endeavour sails home in triumph”