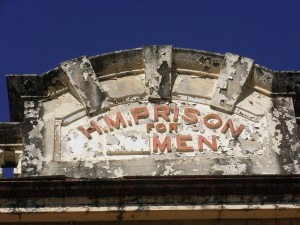 Brisbane has seen some horrific murders, the worst the 1973 Whiskey Au Go Go nightclub firebombing that killed 15 patrons and staff.

A lead-in to National Law Week (14-20 May), the tour also looks at landmark events in Brisbane’s past to do with social justice issues like conditions for prisoners, women’s rights, and South African apartheid.

For tour guide Martin Burns SC, a criminal defence barrister, revisiting heritage listed Boggo Road Jail was a reminder of what a “horrible” and “miserable” place it was for his incarcerated clients.

“It was always a traumatic experience coming here; it chills me just coming back,” he said.

On the amusing side, there was the sign near the prison entrance warning unauthorised persons to keep out.

“Who would want to get in?” said Mr Burns.

“These [black holes] marked the lowest ebb in the prison’s history,” he said.

As to the jail’s reputation for being haunted by ghosts, Mr Bazely said some mornings he found security gates left open even though he had locked them the previous day.

“It’s a bit of a Ripley’s Believe It Or Not situation,” he said.

In the city’s history of human rights activism, two near-mythical locations visited on the tour were the Regatta Hotel in Coronation Drive at Milton and the Tower Mill Motel in Wickham Terrace at Spring Hill.

It was at the Regatta Hotel in 1965 that Merle Thornton (mother of actor Sigrid Thornton) and Rosalie Bognor chained themselves to the footrail in the men-only public bar demanding equal rights for women.

And it was outside the Tower Mill Motel in 1971 that anti-apartheid protesters demonstrated against the tour by the South African Springboks Rugby Union team which was staying at the motel.

The disappearance of Marjorie Norval, the tragic death of 11-year old Hector Vasyli, the Red Flag Riots, and the Battle of Brisbane are just some of the other fascinating incidents covered during the two hour tour.

Mr Burns said the illicit gambling, liquor and prostitution activities of the 1970s and ’80s, which had spawned an underworld rife with police corruption, were no longer illegal.

“All of those things are now freely available,” he said.