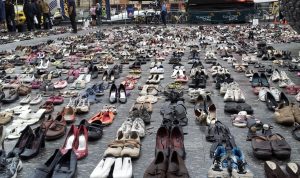 In a stark reminder of the lives lost on Australian roads each year, more than 1400 pairs of shoes lined Brisbane Square today for Fatality Free Friday.

He said the most critical factor of fatal road crashes was the first two years of driving.

“In the majority of cases, they are stepping from a controlled and supervised learner’s environment where there are strict controls, into a situation where they have entire responsibility for the vehicle and in some situations responsibility also for passengers,” he said.

“So there’s a lot of responsibility and not a lot of supervision – combine that with limited experience of vehicle dynamics, limited understanding of the road rules and crucially, of the reactions of other drivers around them, and they are at significantly higher risk.”

“Young people need to remember when they get behind the wheel of a car, they are considered a vulnerable road user and things like vehicle speed, drinking and driving and driving whilst tired are the big things they need to be aware of,” he said.

“We’ve also seen the uptake of mobile phones and apps is significantly greater with younger drivers and they are more inclined to use their phones while driving – they are a dangerous distraction.”

The Australian Road Safety Foundation said while the focus of Fatality Free Friday was a zero road toll for just one day of the year, it was an important opportunity for drivers to take the Road Safety Pledge and commit to safe driving every day. 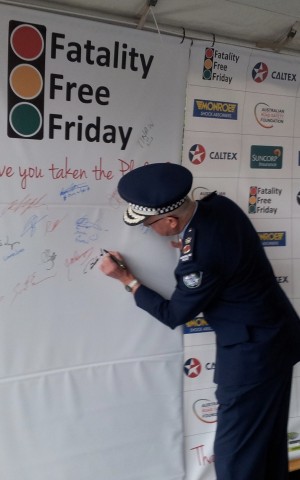 “In 1973 the road toll peaked in Queensland, and while there were a lot less drivers and vehicles on the road than there are today, there were 638 deaths on Queensland roads.

“Last year there was 269 deaths, the year before 249 – that shows you are making a difference and we can do a lot better than we did in the past.

“But be assured that what you are doing is making a difference and we can avoid the symbolism of all of these shoes, representing the people who are no longer with us.”