Women journalists get inside stories in war zones 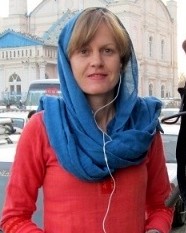 It can be an advantage to be a female journalist in war zones, according to war correspondent Sally Sara.

People are often more willing to speak to women journalists, especially other women, she said.

In particular it was possible to have access to homes and speak to women, something often denied to men in traditional Islamic communities.

Ms Sara (pictured, left) risked her life as a correspondent in Iraq, Lebanon and Afghanistan for the Australian Broadcasting Corporation.

She said she believed the stories of Afghan women and children, who make up three-quarters of the population, were as valuable and newsworthy as the military stories.

Ms Sara also said psychological therapy was crucial for journalists who witness trauma and horror throughout their careers, not just in war zones but locally.

“I wouldn’t go out with a broken camera – don’t go out as a broken journo,” she said.

While chasing a great news story was always important, there was no story that was worth risking your life for.

She said it was crucial young journalists didn’t dismiss regional employment opportunities, as needing to generate her own news stories gave her precious skills she still used today.

She urged students not to be a “story snob”, as the stories that others saw as not important had led her to some of her best pieces.

“The best way to get a story is to do a story,” she said.

A drop-out from university and knocked back an astonishing 22 times before landing her first job, Ms Sara said resilience and perseverance were the keys.

Ms Sara was giving a masterclass in Brisbane this week as part of the Commonwealth Broadcasting Association general conference.