Tens of thousands of people lined the streets of Brisbane to view the 2012 Anzac Day parade and applaud the marching veterans.

Along every street of the parade all vantage points were taken.

In places people were packed six-deep and bus seats turned into sought-after high ground for photographers.

“Every year you see a thickening of the crowds,” one veteran said.

“In Australia and definitely in Brisbane I would say Anzac Day is celebrated more so than in years previous.”

Australians of all ages marched alongside veterans behind banners and bands. Some rode in military jeeps, golf carts and trucks.

A veteran Army nurse said she was proud of the younger members of the military taking part in the marches. 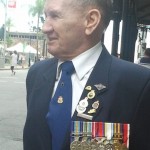 “The thing that really gets me is the teenagers,” she said.

“They go overseas and they are there because they choose to fight.”

Reg Green, a veteran of Malaysian and Korean tours, said the march was conducted well.

“I think it was terrific and proud, the marches and all,” he said.