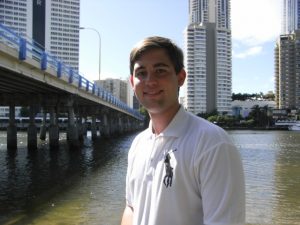 It’s not what you’d expect — a young man campaigning for fewer nightclubs in the glitter strip of Surfers Paradise — but teenager Alex O’Donnell wants to close some of them down.

He is standing for election to the Gold Coast City Council with a plan to reduce the number of nightclubs to help curb late night hooliganism – usually committed by males of his age group.

Enforcing laws against serving intoxicated nightclub patrons, education in schools, and encouraging wider use of the Orchid Avenue chill-out zone would also help, he said.

“Young people need to be taught how to respect themselves and the laid-back attitude to drugs and alcohol has to change,” he said.

At 18 Mr O’Donnell is the youngest of the 60 candidates running for election in the Coast’s 14 electoral Divisions.

A second-year law and government student at Griffith University, he’s put his studies on hold to devote himself full-time time to campaigning.

He said politics is the reason he gets up in the morning and if he could have stood for election 10 years ago he would have.

The council division for which he is running (division 7) includes the suburbs of Surfers Paradise, Main Beach, Isle of Capri, Benowa, Bundall and parts of Southport and Ashmore.

The division has the oldest population on the Gold Coast, but Mr O’Donnell doesn’t see his youth as an issue.

“If they listen to what I have to say people will vote for me.”

A self-styled conservative, Mr O’Donnell nevertheless is a staunch republican rather than a monarchist.

He believes every Australian should have the right to aspire to be head of state.