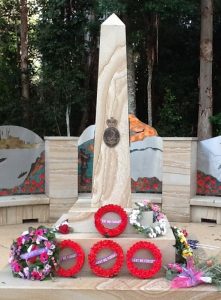 For every major Dawn Service around the country, there are hundreds of smaller, more modest services to commemorate Anzac Day in regional Australia. Our reporter found the simple service at Springbrook, west of the Gold Coast an uplifting experience.

It’s around half past four on Anzac Day and it’s pitch black on the Springbrook plateau.

Driving to the war memorial, torch lights can be seen bobbing in the darkness on the side of the road; locals on their way to the Dawn Service.

It’s hard to miss the memorial site behind the community hall nestled next to the SES fire station on Carrick Road.

A spotlight shines on the sandstone memorial, while the fire station’s lights beam out onto the road.

About 50 people have gathered for the service, which has been organised by local Vietnam veteran John Craufurd.

Mr Craufurd served with the 8/9 RAR battalion in 1969, a regiment that continues to carry on the Anzac spirit in Afghanistan.

He is busy testing out the PA system while locals chat to their neighbours, shuffling their feet in an effort to keep warm.

Mr Craufurd warned me this morning’s Dawn Service would be pretty low-key. 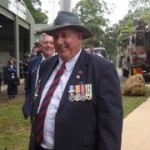 “We like to keep the Dawn Service relaxed and casual, in the spirit of two Aussie war veterans, who meet at dawn every Anzac day to remember their fallen mates over a beer in the cemetery,” he says.

“It may not be the largest Dawn Service in Queensland, but I don’t think those who make it are after too much ceremony.

“If you get along to the march and service later on in the day though, there’s going to be a pretty special Catafalque Party, young diggers who are in the same battalion I served with in Vietnam.”

The Catafalque Party refers to the four armed guards who stand at the corners of a memorial with heads bowed and weapons reversed as a symbolic form of respect for those who have fallen.

Mr Crauford stands a little taller and continues to run through last minute details, calling out through the crowd to ensure the two ladies giving readings are ready.

There is no band or bugler here and while Mr Crauford tries to find the national anthem on the CD player there are few hiccups.

The bugle sounds twice and he apologises: “Sorry folks, I bunged that one up.”

However, those gathered round the memorial are not fazed.

It is a sincere service, and perhaps because of its simplicity with mishaps included, it’s a powerful reflection of what Anzac Day is all about.

After the service, Mr Crauford tells me he’s looking forward to breakfast and the rest of the day.

“That’s what Anzac Day does these days. It seems to bring people together.”

Watching the small crowd disappear into the still dark morning, it’s not easy to disagree with him.

One Response to “Simple tribute a testimony to Anzac Day spirit”