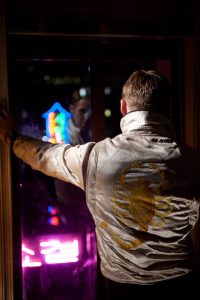 Director Nicolas Winding Refn delivers a vicious combination of imagery and violence which draws much of its cinematic appeal from the electronic pop score composed by Cliff Martinez.

Ryan Gosling stars as the unnamed protagonist, whom we can call the driver.

The driver moonlights as a getaway driver and is a stunt driver by day while also being a mechanic.

The driver exudes personality despite his limited dialogue and subtle temperament. Gosling demonstrates a very Steve McQueen vibe at times using his sharp stares and natural charisma to keep the characters mystique alive.

Where Gosling does not speak he more than makes up for with close quarter violence, and through the very art house stylized direction creates a very personal gritty edge to the limited but in your face action.

The film is very frugal with the driver’s history but the character makes reference to a possibly already dark past when he points out his “hands are dirty” when offered a hand to greet.

Carey Mulligan is the vulnerable young mother Irene Carey who like her son is in need for a male role model, which the driver inadvertently finds himself to be, however he quickly feels comfortable in his role.

Refn was influenced by the ’80s action films from the United States, and this is evident throughout the film making the film truly great.

This is not one to miss – watch it.