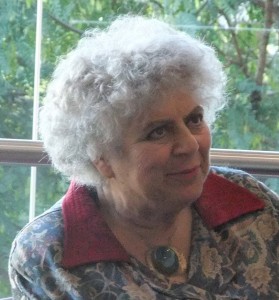 They settle comfortably into the Victorian drawing room featuring a gilt-edged portrait of Dickens, several chairs, and a copy of the lectern which Dickens designed for his lucrative dramatic reading tours.

Character sketches alternate with narration and dramatic readings to show how Dickens’ characters were drawn from his life. Margolyes’ instant possession of 26 characters (23 female and 3 male) in turn delight and horrify the audience. Dickens can be humorous or cruel, sometimes both.

In Act I we meet Dickens’ mother (Mrs Micawber, David Copperfield), his beloved grandmother (Mrs Lirriper, Household Words), and Mrs Roylance “of the hard grey eye” (Mrs Pipchin, Dombey and Son) with whom he boarded while his family was in debtors’ prison.

And each distinctive character appears without hesitation.

Tightly directed by Sonia Fraser, Margolyes relishes performance cues from Dickens — Mrs Gamp’s alcoholic slur (“chimbley-piece”, “dispoged”) as she lays out the dead man, the teaspoon flourish of Mr Bumble while courting Mrs Corney (“I love doing that,” she said), and the slang of Miss Mowcher, the dwarf manicurist. As Mrs Hill, Miss Mowcher’s inspiration, objected to “the vulgar slang of language”, Dickens changed her character to “very saintly and very boring”.

The Act II climax shocks. Dickens’ affair with a young actress ended his marriage. He described Catherine, mother to their 12 children, as “near being a donkey as one of her sex can be”. As Dickens misrepresented their marriage in the media to retain his public’s affection, Catherine bequeathed the first love letters from Charles to the British Museum. Co-author and director, Sonia Fraser, said in the program, “I am personally proud of the fact that we were the first to tell Catherine Dickens’ story.”

“Autumn Leaves”, (“How like those hopes in their decay, how faded are they now?”), a song Dickens wrote for his first play, bookends Pip’s first encounter with Miss Havisham and Estella. Margolyes performs, then concludes with pathos, “the misplaced and mis-married” Dickens is Miss Havisham.

The final portrait is the tenderest: Miss Flite (Bleak House) who tends her birds and waits for justice.

Dickens’ Women, first performed in 1989, was written for two people. The next year, it changed to a one-woman show after her fellow actor married and declined to tour, Miriam Margolyes said.

The dynamic range of the show from narration to character sketch allows for subtle changes of pace and opportunities for Margolyes to interact with her audience. “I definitely like to keep connection with my audience,” Margolyes confirmed.

Dickens’ Women celebrates life, relationships and language. Whether a Dickens fan or novice, this is theatre at its most enriching.

The production is touring Australia and New Zealand to celebrate the bicentenary of Dickens’ birth.