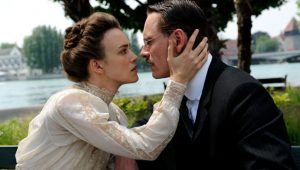 At the start of the film we see her, writhing and laughing maniacally, carried from a coach into a psychiatric hospital in Zurich.

We soon learn that, as a young child, Sabina was regularly taken to a small room and spanked on the behind by her father. She confesses it “excited” her. Obviously neurotic (too obviously thanks to some bizarre overacting by Ms Knightley), she admits she “touches” herself, but is otherwise sexually inexperienced.

Jung, too, in his own way is inexperienced. With his naively held bourgeois values and his passionless marriage to a conventional, non-intellectual wife, Jung is an easy target for Otto Gross (Vincent Cassel), a boastfully hedonistic patient who, like the serpent in the Garden of Eden, tempts Jung into a life-changing act of transgression: a sexual relationship with Sabina, spanking included.

The irony is impossible to miss. Embarked on an affair both adulterous and professionally unethical, Jung increasingly dissents from Freud’s authoritarian insistence on an exclusively sexual interpretation of human behaviour. In Jung’s words: “There has to be another hinge.”

Relationships evolve, become untenable, and effectively end. Not without regret, Jung distances himself from Sabina; to his credit, he encourages her to study medicine and become a psychiatrist. As for Freud, the schism is irreparable.

After an hour and a half, nine years have gone by. It’s now 1913. A believer in premonitions, Jung recounts a dream which we at once recognise as being an ominous reference to the start of World War I the following year. This epilogue-like segue into the future however really is way too clever, and more than a little pat.

We wait for this film to do something to us: genuinely shock us, sear us with its eroticism, infuse us with sympathy, awaken us to the sublime absurdity of being human. It never happens. Jung has his fling; Sabina indulges her sadomasochism; looking like a Mississippi riverboat gambler, Freud puffs sarcastically on his cigars; the music of Wagner starts up on cue. This could have been an engaging movie; the ingredients were there.

Instead, we get something that’s part-daytime soap opera, part-period melodrama, part-celebrity biopic. In all, an underwhelming cross between an encyclopaedia entry and a scandal sheet. What went wrong?

It’s a film based on a play (The Talking Cure) based on a non-fiction book. Christopher Hampton wrote both the play and the screenplay. We can guess what the play was like: middlebrow, earnest, humourless, overtly “cultural”, respectably titillating, made up of scene after scene of superficially intellectual, claustrophobically intense, breathlessly revealing one-on-one conversations.

It may have worked in a London theatre (especially with an A-list actor like Ralph Fiennes playing Jung), but on the big screen (directed by David Cronenberg) it soon enters the domain of bathos and banality, and pretty much stays there.

One last point. In a scene in Jung’s study the camera pans across a cluttered desk, giving us a brief glimpse of a phrenology bust. Lines divide the plaster-white head into segments, indicating the supposed location of personality traits in specific parts of the brain. So what have we spotted here: a sly joke or a mistake by someone in the props department?

By the early 1900s phrenology had long been discredited as a pseudo-science, the occupation phrenologist being virtually synonymous with charlatan. If Jung had wanted himself and his new science of the mind to be taken seriously, would he have had a phrenology bust on display in his study? We think not.

Photo: Keira Knightley as Sabina gets the undivided attention of Michael Fassbender as psychiatrist Carl Jung.

One Response to “Review: A Dangerous Method”