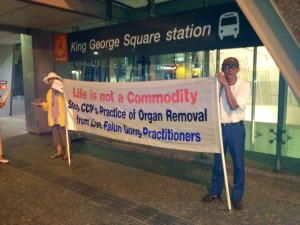 The Falun Gong group, a banned organisation in China, says 45,000 of its members have had organs harvested against their will.

He said live organ harvesting began after Falun Gong’s ban in 1999 and the arrest of millions of followers.

“They are injected, they are sedated and their organs are taken while they are alive,” Mr Andress said.

“This has happened to at least 41,500 Falun Gong prisoners.”

The figure of 41,500 is the minimum estimate that former Canadian Secretary of State David Kilgour and human rights lawyer David Matas conclude in their book Bloody Harvest, published in 2009.

The book is an independent investigative account into the allegations of live organ harvesting from Falun Gong practitioners in China.

He said while the association received support from Australian political figures privately, few politicians would speak publically for fears of damaging relations with China.

Mr Andress likened it to key political figures outside of Australia refusing to meet with the Dalai Lama during his recent visit.

Falun Gong, a non-violent spiritual organisation, had up to 100 million followers throughout China before it was outlawed by the Chinese communist government.

Candlelight vigils and petition signings are held monthly in Brisbane, with the next to be held on 20 April at King George Square.