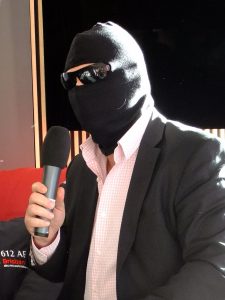 “Not Campbell Newman” (@Can_Do_Campbell) was a mystery guest at the Lord Mayor’s Forum in Brisbane yesterday.

@Can_Do describes (pictured left) himself on Twitter as “the Qld Premier of Parody. Ex-Fake Lord Mayor, but am still so very fake.”

@Can_Do began tweeting as the fake Lord Mayor two years ago after receiving a car-parking fine which was upheld by City Council: his car was “one foot over the yellow line”.

He has gained 3611 followers with his passionate love for Brisbane, and made it clear that he has “no political alignment whatsoever”.

“Brisbane’s leadership is important because we have a great city,” he said at the forum, staged before the mayoral candidates’ debate.

@Can_Do said: “The level and substance of campaigning for Saturday’s election is, as Jim [Soorley] and Sally-Anne [Atkinson] touched on earlier, too politicised.”

His hopes for Saturday’s poll are that “we get the best person possible, we have a real leader, someone who cares deeply about the city and will show us some real leadership.

“Someone with real passion who will stand up on a table in Caxton Street when the Maroons are playing and cheer them on. Someone who loves the city as much as we do.”

Clues to the real identity of @Can_Do_Campbell are few.

Tim Cox, 612 Brisbane, recognised the balaclava as motorcycle brand, and an earlier attempt to unmask him established that he is known to author and blogger John Birmingham.

When asked his identity @Can_Do said, “It’s not important who I am. It’s the message that’s the most important thing. I’m an inner city working man who wanted a voice.”