Hysterical fans surge in One Direction 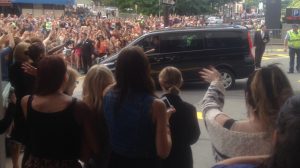 Shrieking fans greeted a brief appearance of touring band One Direction outside the Sofitel Hotel in Brisbane this week.

Girls camped out overnight to catch a glimpse of the British-Irish boy band before they set off for their Brisbane debut at the Convention Centre.

Hordes of hysterical young women were barricaded from the hotel this morning to let the band get onto the main road.

The band left the hotel in a convoy of police and black vans with tinted windows.

When the fans caught glimpse of the boys in the first van they ran down the street in pursuit of the teen heartthrobs.

One Direction have announced they will start their 2013 Australian tour in Brisbane with concerts on September 11 and 12.