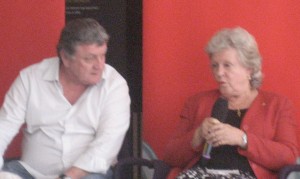 Two former Brisbane mayors say the city’s top job has not changed very much, but there’s now too much overlap of state and local government powers.

Mr Soorley, Labor Party Lord Mayor from 1991 to 2003 said: “It’s managing a very large organisation and the role is a bit like an executive chair in America.”

Dealing with politics and running community involvements were other factors Mr Soorley saw in the top position.

Ms Atkinson, Liberal Party Lord Mayor from 1985 to 1991 said in the past mayors ran cities and left the state government to “do its stuff”.

There was now duplication and overlapping of functions such as with public transport.

Mr Soorley agreed. “Brisbane use to run buses but now it’s run by Translink. Brisbane used to run the water and the sewage and now it’s basically run by state.”

They said despite this, issues like the potholes in the roads, remained the same.

During the debate at the ABC’s South Bank studios, Greens candidate Andrew Bartlett, Labor’s Ray Smith, and the LNP’s Graham Quirk were questioned about infrastructure, cost of living and rate increases.