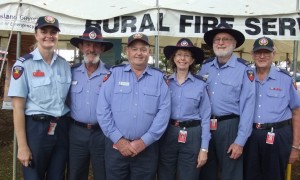 South-east Queensland’s fire-fighters are ablaze this weekend at the regional fire-fighters championships at Mount Tamborine showgrounds.

Twenty-two teams are competing in 10 events to find a winning team that best displays the skills and drills of everyday fire-fighting.

Events include ladder skills and working with hoses of small or large diameter.

Winners of the regional championships will compete in the State Fire-fighter Championship in August 2012 at Hervey Bay.

Ricky Alderdice, a fire-fighter for over three years with Bonogin Firefighters, enjoys the camaraderie of the event.

He says the challenge for fire-fighters is remaining in charge of the fire: “It would be scary if we lost it [the fire and] where it’s going to go, such as, raging towards houses.”

A volunteer community educators (VCE) team from Hattonvale-Summerholme in the Lockyer Valley are competing in the event, and colleagues had travelled to support their team.

Manager of the VCE scheme in south-east Queensland Peta Miller-Rose praised the 86 volunteers who live and work in their own communities to educate about fire safety in the home and the bush.

“They’re brilliant! I’m very lucky to work with them!” she said.

Ms Miller-Rose, said the volunteers, of whom some are ex-fire-fighters, work with the local fire service to educate schools, seniors, and families using the “Prepare Act Survive” guide to prepare an emergency plan.

One Response to “Fire-fighters compete to improve skills”