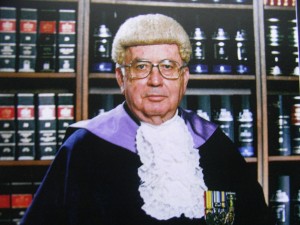 Among the mourners were members of the judiciary, legal profession, Indigenous community, police and military, reflecting the many public-spirited activities of Judge Shanahan (pictured left) over the course of a long and busy life.

Seated in front of Judge Shanahan’s flag-draped coffin, his great-nephew David Williams gave a moving performance on the didgeridoo as a tribute to the man he knew as “the Colonel”.

Judge Shanahan had “the utmost respect for the indigenous people of this country,” said Mr Williams.

Judge Shanahan’s daughter Mary Wallace, herself a solicitor, said her father started work at the age of 15, completing his schooling and legal studies at night, before being called to the Bar in 1951 at the age of 22.

Ms Wallace said her father asked his wife-to-be Patricia, not long after he met her, to pin together the cuff of his CMF jacket.

“That now very rusted pin is to be buried with him today,” said Ms Wallace.

Judge Shanahan’s son Tim Shanahan, a church deacon, said his father completed his memoirs last year, but given the breadth of his father’s experiences and interests “it should’ve been three times longer”.

Mr Shanahan said his father was a Labor man, a voracious reader, a man of strong faith and a supporter of numerous charities.

He had a particular dislike for people who towed caravans on the highways, Mr Shanahan said.

He was deeply religious, but with “a hugely irreverent sense of humour”, Judge Martin said.

“All his decisions both in court and out of court were founded on common sense and a great understanding of human nature.”

An honour guard of former members of the Army Reserve 30th Battalion, of which Judge Shanahan had been the commanding officer from 1969 to 1971, saluted the coffin as it was wheeled from the church door to the waiting hearse.

A private burial was held at Mount Gravatt lawn cemetery.