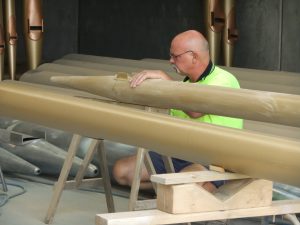 The Brisbane City Hall organ will make its grand re-entrance to Brisbane’s cultural life next year after restoration costing about $1.9 million.

Intense restoration work on the 1890s classic organ continues in a workshop at Hemmant in Brisbane’s east.

He said the organ was like a Rolls Royce – a quality organ with a lot of get up and go.

“Voicing [the organ] is an art in itself,” Mr Pierce said.

Organ pipes up to 2.4 metres high would be 60 to 80 percent tuned or “voiced” in the workshop – a process that takes half the time of fully voicing the organ onsite.

The final voicing would take five to six months full-time at City Hall to achieve the best sound for the auditorium.

“The organ must have the ‘wow’ factor in character with the original organ,” he said.

To “tune his ear” for the task ahead, Mr Pierce will visit five UK organs of similar age built by the same firm, Henry Willis and Sons Ltd.

Not only will the organ be restored to its former glory, but renovated with electronic wizardry adding “bells and whistles”. 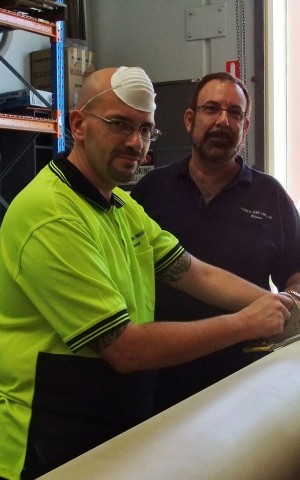 A computer system will be installed between the console and the organ providing quicker responses from the pipes, and the ability to record or transpose the music played.

A further year is required to complete the restoration including reinstallation and voicing in the City Hall, Mr Pierce said.

Dr Geoffrey Cox of the Organ Historical Trust of Australia said the organ was built in 1891-92 for Brisbane’s Exhibition Building at Bowen Hills – better known to locals as the Old Museum.

“The firm Henry Willis & Sons, London, was headed at this time by its founder, ‘Father’ Henry Willis, and the Brisbane instrument was of similar size to, and almost contemporary with, the instrument that Willis built for Blenheim Palace, Woodstock, Oxfordshire,” Dr Cox said.

The organ was enlarged and transferred to the new Brisbane City Hall in 1929 after the Royal National Association (RNA) was declared bankrupt.

“The official re-opening of the organ took place at a recital given on 8 April 1930, the day on which the City Hall itself was opened, although the organ had already been completed by 6 July 1929, when it was demonstrated to the aldermen,” Dr Cox said.

Henry Willis and Sons Ltd managing director Mr David Wyld said: “This is the largest Willis organ in the southern hemisphere, at least for the moment!”

City Hall is expected to re-open on 8th April 2013, the 83rd anniversary of the building’s original opening.

The search will then begin for the next city organist, to replace Dr Robert Boughen, Brisbane’s third person to hold that position.