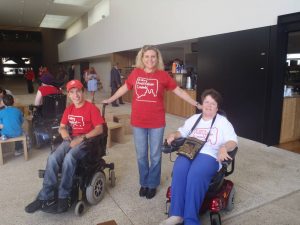 Families of many disabled Australians suffer financial hardship caring for their loved ones.

This was a common story told by carers and family members gathered at Reddacliff Place in Brisbane today to advocate for the National Disability Insurance Scheme (NDIS).

Event organiser Fiona Anderson of the Every Australian Counts campaign had first-hand experience with the challenges of caring for a disabled family member.

Her 16-year-old son Sandy has cerebral palsy. The family received no money from the government to help with her son’s care and Ms Anderson was forced to give up her job to look after her son.

“He’s a motor-mouth. Now we can’t get him to stop talking,” Richard said.

To top it off, the specialised van also attracted GST, putting it into the same category as luxury vehicles.

Cerebral palsy was a common condition in Australia, with one affected child born every eight hours. Mary-Therese Samuels, who lived with the condition, feels disabled Australians are still not accepted by family or the Australian public.

“Many of my relatives will not talk to me. It makes you feel like a modern-day leper,” Ms Samuels said.

Event Volunteer Mel Geltch said the campaign was close to her heart as her nephew had an intellectual disability which left him mute and he did not receive the necessary funding to live a normal life.

There was good news for Ms Geltch, Ms Samuels, the Porter family and many other families. The Prime Minister Julia Gillard announced yesterday that the Federal Government would fund a portion of the NDIS in the May budget.

Ms Gillard made a commitment to disabled Australians saying they would receive funding by May 2013.