Brown kicks his 500th as Brisbane Lions storm to victory 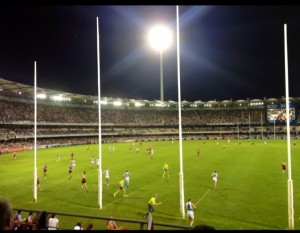 The Brisbane Lions stormed to an exhilarating 65 point win over the Gold Coast Suns in the season’s first AFL QClash at the Gabba last night.

After managing just three disposals last week in a miserable display against Fremantle the veteran superstar was kept goalless for the first half in his first clash against the Suns.

But as Brisbane took control in the later stages of the game Brown booted three, of which his second was the almighty 500th.

After winning one match each in last season’s QClashes both teams were desperate for a victory in their third encounter.

But goals from Lions players Tom Rockliff, Aaron Cornelius and Jared Polec had the Lions heading into the second quarter with a five-point lead.

The second term saw the Suns grab the lead early with a goal from Trent McKenzie but it was snatched back just two minutes later with a terrific goal from Lions midfielder Andrew Raines.

The lead changed several times as both teams played contested but error filled football before the Lions headed into the second half with an eight-point margin.

As a ferocious Brisbane booted five goals and kept the Suns goalless in the third term the game looked all but over.

Suns captain Gary Ablett worked as hard as ever with 33 disposals for the match but not even he could keep the young team in the game as they were out run by the more mature Lions.

After a disappointing start to the season the Lions can claim the QClash cup for the second consecutive time from the Gold Coast, who are still without a win this year.

In further bad news for the Gold Coast, captain Gary Ablett hobbled from the field at the end of the match. He will have scans today for a suspected knee injury.