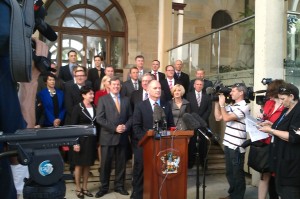 “Health consumes 25 percent of the budget. It needs a minister who will be able to take it forward,” Mr Newman said.

The Premier said he didn’t believe he had passed Mr Springborg a poisoned chalice.

“Frankly the state of Queensland’s finances, the state of these departments and their performance delivery means that all these jobs are difficult jobs. That’s the sad situation we face,” he said.

He said the new cabinet would provide strong representation for Queensland.

“It’s a diverse lineup. There is strong representation for the regions of Queensland as I promised and this team is going to work very, very hard for Queenslanders,” Mr Newman said.

The Opposition Leader said while Labor welcomed the appointment of Queensland’s first female Speaker, Ms Simpson should have been appointed to a senior cabinet position.

The ministers will be sworn in on Tuesday by the Governor, Penelope Wensley.