Koch urges journalists to be a voice for the voiceless 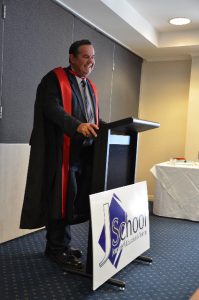 Mr Koch, who received an honorary doctorate from Jschool in recognition of his contribution to journalism, said recruits to journalism should uphold the values of the profession and respect their role in society. They should be a “voice for the voiceless”, bringing the plight of marginalised groups to the attention of policy-makers.

Mr Koch, who is renowned for his coverage of indigenous issues, said journalists should be persistent in getting information.

He said they should never stop asking questions, using old-fashioned one-to-one interviewing rather than depending on internet sources of information.

“He has helped huge numbers of reporters at the beginning and later stages of their careers, a fact noted by Laurie Oakes – last year’s Jschool honorary doctorate recipient – at the Queensland Clarion Awards in September,” he said.

Mr Koch, who retired this year as chief reporter of The Australian newspaper, received the Clarion award for Most Outstanding Contribution to Journalism

“His work shows how important good journalism is within society, and what a difference it can make,” Professor Henningham said.

As well as winning five Walkleys, Mr Koch has been Graham Perkin Australian Journalist of the Year and winner of the Keith Murdoch award, has won almost 50 state awards and the Premier’s award for literature for his books on Queensland politics.