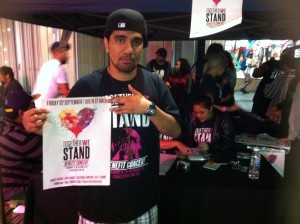 Thousands of people gathered in Queen Street Mall on Friday night for a five-hour charity concert that raised more than $15,000 for the victims of the Slacks Creek house fire.

Labeled the worst house fire in the state in a decade it claimed the lives of 11 people from the Tongan and Samoan community. Eight were children.

It took four days and four friends from different Brisbane clubs to pool their resources and organise the Together We Stand fundraising event, featuring 25 performers.

Organiser Len Tagilao (pictured above) represented the Lale family – Jeremiah Lale lost his five children aged eight to 18 along with his wife in the blaze.

“We wanted to help so we came together combined our contacts and it’s been very well received, we’ve had a lot of support,” Mr Tagilao said.

The event ran an hour over time with crowds still gathering as musicians packed up. People made donations ranging from $200 to five cents, with Mr Tagilao refusing to “knock back a cent”.

Spirits were high with impromptu dancing onstage as volunteers swept through the crowd collecting donations.

Volunteer Sarah Jane had filled her bucket four times in less than two hours and was “amazed” at the audience numbers.

“It’s a good atmosphere, people are happy and everyone is being generous,” Jane said.

“It’s been a fantastic, well-organised and a value packed night,” Major Dickson said. 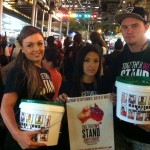 The Salvation Army will distribute the $15,480 raised among the families.

Proceeds will be used to pay for funeral expenses, clothes, food, transport and any items lost in the fire.

Despite the upbeat atmosphere there was underlying sadness tears shed between smiles.

Audience member Laisa Qoro witnessed crying and shared a few sniffles with fellow spectators as one performer sang a ballad dedicated to the victims.