Man jailed for brutal rape and murder of elderly woman 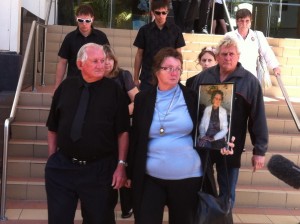 A 20-year-old man was sent to jail for life this week by a Supreme Court judge in Rockhampton after pleading guilty to raping and murdering an elderly woman.

The 82-year-old victim died in hospital a week after being attacked in her backyard by David Samuel Aubrey Ray.

Mrs Iris Daphne Temperley, a great-great-grandmother, was raking leaves at 8am on Australia Day in 2010 when she was attacked.

About 8.40am her neighbour Mark Booth noticed a man lying in her backyard on what appeared to be a mattress.

Realising it wasn’t a mattress but in fact Mrs Temperley he immediately called emergency services.

Earlier that morning Ray was caught on CCTV stealing alcohol from a local hotel and partying before breaking into Mrs Temperley’s house.

Ray stole a fire extinguisher from her home and used it to repeatedly assault her, leaving lacerations on her upper thighs.

The court heard that she received extensive facial injuries, broken nose, two fractured ribs, fractured sternum, bleeding from her ears and nose and a collapse in two lower lobes in her lungs.

She also received tears in genital regions which resulted in profuse bleeding that ultimately caused her death.

Ray then went on to commit another burglary, stealing alcohol and a $3000 gold ring, which was later recovered.

Due to the extent of her injuries and blood thinning medication Mrs Temperley died in Royal Brisbane Hospital on 3 February, 2010.

Crown prosecutor Michael Cowen said the evidence against Ray was “overwhelming”, describing the event as vicious and appalling.

Mrs Temperley’s DNA was found on Ray’s vest, which he wore to his interview with police after turning himself in.

“She suffered fear and pain, words can barely describe the evil you have done,” Mr Cowen said.

Afterward the sentencing family could barely speak through their tears.

Mrs Temperley was described by Mr Cowen as a happy and adventurous woman.

“She was the glue that held the family together,” he said.

The victim’s son, Allen Temperley, said despite the conclusion of the trial their grief would continue because they now had to live without their loved one.

“We will have to live with the knowledge of the horrendous pain and suffering she endured at the hands of this murderer,” he said.

“I would hope no family has to go through what our family has gone through.”

Justice Duncan McMeekin sentenced Ray to life in prison for murder, two counts of rape, 15 years for the burglary of Mrs Temperley’s home, two years for break and enter into the hotel, three years for the second burglary and one month for trespass.

“This sentencing is due to the violent nature of the offence and vulnerability of the victim,” Justice McMeekin said.