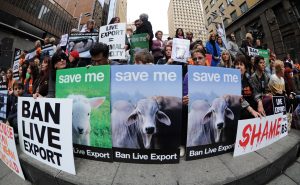 Thousands of people joined protests in capital cities over the weekend to urge the Australian Parliament to ban live export in Australia.

The rallies follow a lift on a temporary ban put in place after footage of the mistreatment of cattle in Indonesian abattoirs was aired on ABC’s Four Corners program.

Animals Australia advocate and RSPCA cruelty investigator Lyn White has called on the Prime Minister to let MPs have a conscience vote when the two bills which oppose live animal exports go before the House of Representatives this week.

One protester, Kim of Hyde Park said at the Sydney rally: “I understand that there’s a small chance that both bills are likely to pass, but when you’ve got thousands of people across the nation asking for change, it shouldn’t be ignored,”

Kate of North Bondi said: “People would have been very much aware of what was happening abroad and instead of doing something about it, they decided to turn a blind eye and I believe that, that is equally as terrible.”