Row over future of historic church 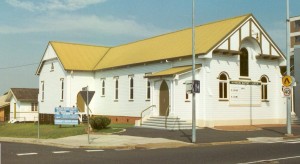 A war of words has broken out between Brisbane city councillors over an historic church at Wynnum slated for demolition to make way for a six-storey office block.

She was “disturbed recently to get some feedback that there is a councillor who really doesn’t seem to have that same attitude towards historic places in our city”.

Cr Cooper said the church, built in 1912, was listed in Council’s heritage register.

“This council is very strong in protecting our identity in a variety of ways,” Cr Cooper said.

She listed several instances of protection, including pre-1900 houses “which had no forms of protection on them at all” until it was actioned by the neighbourhood planning committee.

Cr Cooper accused councillors from “the other side of the chamber” of being “missing in action” when it came to making decisions or recommendations.

“The council planning appeals section and Cr Cooper are sticking by their requirement to move the hall to Mt Gravatt,” he said.

“I see no value for Wynnum Manly ward in having an old church hall relocated to the Mt Gravatt Showgrounds. If that is the best council can come up with then I have no objection to demolition.”

Developer BMD Group bought the Baptist Church property which, includes the hall, about five years ago.

“BMD are appealing the condition and the matter will be decided by the Planning and Environment Court.”

The Baptist church was originally constructed on two allotments in Edith street.

The church was extended as the congregation grew then it was moved to a larger site, on the corner of Bay Terrace and Clara street, in 1930.