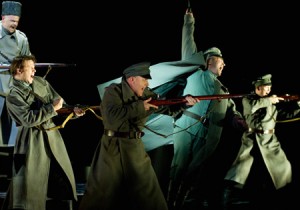 Based on an iconic book and epic three-hour movie, the musical adaptation of Dr Zhivago has a lot to live up to.

After all, song and dance would not be the first choice for many to convey the loneliness, individualism and ideology explored in Boris Pasternak’s novel. Yet director Des McAnuff and composer Lucy Simon manage to capture the classic love story, using every feature of a modern musical to its full advantage.

The music score is amazing, sweeping the audience off their feet and transporting them into every scene. The music is reminiscent of Russian culture and echoes the love, tension and sadness throughout the story.

Further adding to the musical’s success are the song lyrics. Written by Michael Korie and Amy Powers, the lyrics are sometimes heart-wrenching, sometimes even comedic, but are still able to reflect Pasternak’s own command of language with their imagery. The singers themselves are particularly awe-inspiring, so much so that their blatant disregard for Russian accents is forgivable.

Disappointingly, Brisbane’s Thursday evening performance did not include Anthony Warlow as Zhivago. But despite the audible sigh of disappointment that greeted the news, understudy Anton Berezin fitted into the cast seamlessly and rose to the occasion with his powerful voice.

The chemistry between Berezin and Lucy Maunder’s Lara was impressive and believable — an important trait for a story that has been heralded as one of the greatest love stories of all time.

One of the standout scenes was in the Pushkin library, with Zhivago’s wife Tonia (played by Taneel van Zyl) and Lara’s rendition of “It comes as no surprise.” The scene showed off the women’s voices and acting, the tension and confusion felt by the two women almost palpable.

The chorus was equally as strong, supporting the main characters well and belting out impressive harmonies with apparent ease.

With 2000 costumes, the cast was dressed both effectively and accurately by Teresa Negroponte throughout. However, it was a definite disappointment that, given the 40 wigs used for the production, brunette Lara was not transformed into the iconic blonde and there was not a spare brunette wig to be found for Tonia.

Michael Scott Mitchell’s set design reflected the dissolution of great Russia, the majestic pillars changing between acts to become crumbled ruins. The moving panels allowed the stage to change from an open battlefield to an intimate room in just moments. The steel, wheeled platform was also a clever solution to fitting a train on stage.

The motif of chairs was certainly interesting, although without the designer’s notes it was difficult to determine exactly what message they were meant to convey.

But all this cannot overshadow the energy of the cast that emanated from the stage.

Ultimately, it was this energy and clear passion that each cast member brought to the stage that made the final production a standout.

One Response to “Review: Dr Zhivago”