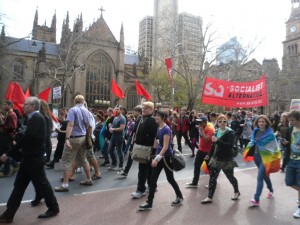 Hundreds of people calling for legalisation of same-sex marriage protested outside Sydney’s Town Hall on Saturday.

Co-convenor of the Community Action Against Homophobia, Cat Rose, told the crowd protests would put pressure on the Labor Party before its national conference in December when changes to the law would be debated.

The group seeks repeal of an amendment to the Marriage Act in 2004 banning same-sex marriage.

More than 400 people marched through the CBD holding signs and chanting “Gay, straight, black, white, marriage is a civil right!”

“It’s great to hear that members of the Labor Party are coming out to support marriage equality. I hope in December they make the right decision,” one protestor, James of Ashfield said.

“Times are changing, we’ve seen progress in New York and I think it’s time that Australia jumps on board and helps in the fight for equality,” said Jess of Balmain.

Protests are set to continue nationwide.