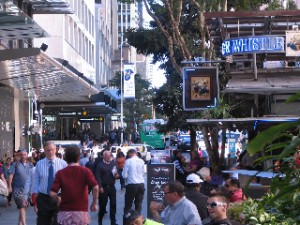 Smoking bans to come into force in Queen Street Mall from September 1 will merely shift smokers and their litter to areas nearby, according to the the Queensland Hotels Association.

He said the current laws would concentrate smokers and the mess of cigarette butts to the edges of the mall.

“We have put in a submission in relation to that into council,” he said.

“Their (the hotels’) customers are going to be impacted – a significant proportion of tourists that visit Brisbane smoke, especially Asian tourist.”

Mr Tims said Brisbane City Council asked stakeholders for comments 12 months ago and the QHA suggested designated smoking areas throughout the Queen Street Mall, but the council rejected the idea.

Mantle Group’s Pig and Whistle general manager Arj Rupesinghe said he was in favour of the smoking bans but it could have been fairer.

“I think if it was the same rule for all public places it would have been good – it’s not in King George Square and that’s a public space”.

He expected the bans to be hard for the council to enforce especially with the number of tourists who visit the mall everyday.

“It’s kind of like when they brought in the no-smoking in bars, it was hard to manage at first but it’s ok now.

“With the amount of tourists who come into the area, it’s going to be hard to manage – that is my concern.

“I’m in favour of it – I don’t think it’s going to affect our trade and hopefully the tourists will understand,” he said.