Council accused of a lousy deal over bike helmets 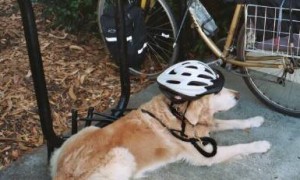 The number of Brisbane cyclists with itchy heads may increase dramatically in the next three months, the Brisbane City Council trialling a shared helmet system for Citycycle.

From next Monday a third of the bike fleet will have a helmet provided free of charge, one of the council’s seven improvements to increase the struggling scheme’s popularity.

Lord Mayor Graham Quirk was upbeat as he discussed the plan for helmets, reminding council that Australia is a free country.

“If people are uncomfortable about using these helmets, that is their absolute right and they are entitled to bring their own helmet,” he said.

Opposition Leader Shayne Sutton remained critical, however, and pointed out head lice could spread through the 400 “sweaty” bike helmets.

Brisbane cyclists faintly supported her, the Brisbane Times’ recent online survey showing 52 per cent of the 1700 voters responded with “no, that’s gross” to the shared helmet trial.

“A few hours and they’ll be dead,” he said. [He meant the lice, not the cyclists.] “The chances of getting head lice from the helmets are very slim.”

He recommended anyone feeling squeamish about the helmets should wipe the helmet before use.

“All you’ve got to do is wipe it with a tissue and check there is no loose hair,” he said.

Picture: You can never be sure who was last wearing that helmet.