Award for couple who fostered 130 kids 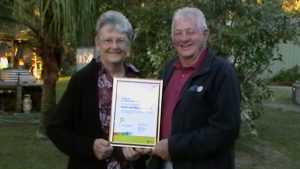 Humble grandparents from a remote property in Logan Village have finally been given the recognition they deserve after dedicating their lives to fostering children.

Last week Wayne and Eileen Hughes were awarded the 2011 Foster and Kinship Excellence Award for Queensland’s south-east region at a special ceremony in Queensland’s Parliament House.

Every year carers are presented awards from seven different regions around Queensland as part of the annual Foster and Kinship Carer Week in August.

“I am constantly impressed by people like the Hughes who open their hearts and homes to help children and young people reach their full potential in life,” he said.

“Carers provide safe and loving homes to more than 7800 children an young people in and out of home care.”

The Hughes say they have been fostering children for more than 20 years and have provided short and long term care to more than 130 children.

“We just thought if we could keep one kid off the streets, we’ve done out little bit for the community,” Mrs Hughes said.

“We are a very humble people and believe there many other carers more worthwhile for the award.”

Moving from New South Wales in 1988 the Hughes built their house from the ground up.

It then became home to many of Brisbane’s most vulnerable children.

“Back then I wanted to take part in Freedom From Hunger where you send money overseas but Wayne said no, he said charity begins in the home, do something for the kids here.”

Wayne who grew up as a ward of the state himself knew all about the hardships these kids faced everyday and was very committed to his role as foster carer.

Even after Eileen was diagnosed with lung cancer three years ago and the recent loss of her daughter, Joanne, 46, Eileen and her husband of 31 years are still very passionate and have three long-term children in their care.

“I said when I turn 70 I would give it up but I’m 75 next February and I’m still going. The only thing that will stop me is when I am six feet under,” she said.

Mercy Family Services foster carer Michelle Amies, who has worked with the Hughes’ for more than two years, hopes they will encourage other people to consider fostering children in need.

“The Hughes are very dedicated people, without carers like Eileen and Wayne these kids have no where to go,” she said.

“There is a lot of support for foster cares. We help provide support, care and advocacy.”

Meanwhile, Queensland Party spokesman for Child Safety, Family and Communities, Ron Wadforth, says the government should instead be working towards rebuilding family units.

“Now Queensland has the title for having the highest per capita number of children between the ages of 0-17 in foster care,” Mr Wadforth said.

“The results of the latest Department of Child Safety figures are deplorable.

“Queensland families are in need of help and support and the number of children in foster care will only increase if the government fails to act now.”

Eileen and Wayne say they acknowledge the importance of rebuilding families and they emphasis to other carers no placement is ever permanent in foster care.

“Kids are like little library books. We bring them home, if they are torn we put a new cover on them and give them back. They are on loan they are not yours to keep,” Mrs Hughes said.

“We just give them a little bit of love, care, security, stability and predictability.”