The Reds continued their dominance of the Super Rugby competition last night, victorious over the Blues 30-13 in front of a sea of red at Suncorp Stadium.

With a healthy attendance of 44,940, with only the southern top tier empty, the crowd were encouraged to repeat ”we are red, we are red” to support their union boys in their first final in 12 years.

The first try at the eleventh minute set the mood for the game, with Reds’ wing rocket man Rod Davies intercepting the ball and making an 80 metre dash from the southern end.

Davies went on to make a hat trick, with two more tries in the second half to seal the Blues’ fate.

The second try came at 30 minutes by Ben Tapuai, and he kissed the ball and threw into the cheering crowd to celebrate.

The one-week-old turf seemed to hold up with the scrums, but a square was displaced at the 32 minute mark, near the northern 22m line and a suited man quickly ran onto the field to stamp it down back into place.

A sneaky first try came for the Blues after the sound of the first half siren when Chris Lowry found a gap in the Reds’ relaxed defence.

This try seemed to give the Blues increased confidence in the beginning of the second half, with an awesome 50m penalty goal by Luke McAlister to bring the score to 15-10.

But the Blues continued to play a loose game, making many mistakes like dropping catches and they struggled to pass through the strong Reds defence. 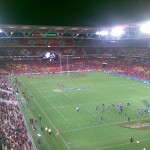 A standout player for the Blues was their right wing Joe Rokocoko, who in his green fluorescent shoes had some great dodging runs but was unsupported by his team around him.

It wasn’t all plain sailing for the Reds however, with Quade Cooper having trouble converting tries – he kicked only three from seven, which may have hurt Queensland if it was a tighter match. But all could be forgiven for his setting up of Tapuai’s try, which deserves to be replayed over and over again. Cooper fended off an avalanche of Blue defenders before delivering a brilliant inside ball for Tapuai to finish the movement.

The Reds will now take on the Canterbury Crusaders who defeated the South African Stormers overnight in Cape Town, 29-10.

The Super Rugby final will be played next Saturday back at Suncorp Stadium (aka Lang Park). As minor premiers the Reds’ semi win gave them the right to host the decider.