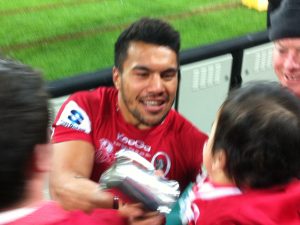 Both teams had come from areas of natural disasters this year, but in the end the Queensland Reds were victorious 18-13 over the Canterbury Crusaders in the Super Rugby grand final on Saturday night.

In front of a sold-out crowd of 52,113, the Crusaders came out strong in a gutsy performance and held 60 percent possession in the first half.

The sides fought tooth and nail and the match remained scoreless until Quade Cooper kicked a penalty goal after 32 minutes. Then three minutes later Dan Carter of the away team chipped ahead only 15m out, re-gathered and scored the first try of the night right between the posts, giving himself an easy conversion. 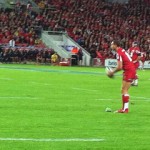 The Reds kept the score tight with another penalty goal, to give the Crusaders a one-point lead at half-time.

A held-up ruling against Brad Thorn early in the second half was followed by a consolation penalty for Canterbury, but then at the 51st minute Queensland’s first try was scored by popular winger Digby Ioane (pictured above), who did a little dance to the crowd in celebration.

The recently laid turf didn’t hold up well in this game, after the semi-final last Saturday and the big Origin game on Wednesday, with a whole section of squares coming up and officials scrambling to pad it down during the game.

Another penalty against the Reds put the scores level at 13-all in the 56th minute and this suspense lasted until Will Genia put another try away for Queensland with an amazing 65m run, giving Queensland the game. 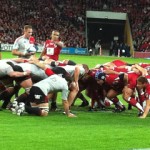 The Reds defied expectations by holding their own in most scrums

Heroic in defeat, and having played every game away this year following the catastrophic Christchurch earthquake, the Crusaders earned generous applause from the crowd at the presentations.

The message on the turf promoted Queensland with the tagline “where Australia shines” and the state certainly has in this past week.