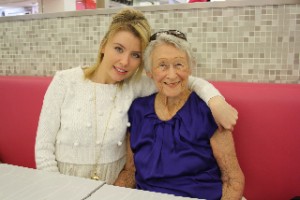 Recognised for her services to the elderly, 22-year-old Ebony Ryan of Taringa is in the running to be awarded the title of Queensland Young Volunteer.

She spends 12 hours a week volunteering for Blue Care where she has three elderly charges. Every Thursday Ebony can be found with Ellen (pictured left with Ebony), one of her “ladies” as she affectionately calls them, drinking coffee, eating biscuits and chatting.

When asked what they talk about Ebony smiles: “her family, my family, past experiences”.

But Ebony learnt to be a carer at a very young age. When only nine she took over the massive task of daily care for her younger sister Chloe, who has developmental delay and epilepsy.

The second eldest in a family of six children, Ebony showers and dresses Chloe every day as well as being her big sister.

Chloe is 18 now but will never intellectually develop past the age of five.

She needs constant supervision and due to her epilepsy is prone to seizures,

“She can’t sit there by herself and you can’t just put her in front of the TV,” Ebony said.

Professor of Youth, Education and Sociology at Queensland University of Technology Andy Brader said it was typical for a Young Carer to become a volunteer in adulthood.

“They are following it on, it’s what they are used to,” he said.

Dr Brader describes Young Carers as having the capability to interact on a higher level but have trouble with being children.

According to Carers Australia’s Bring It! report, released in 2008, 5.2 percent of young people aged 18 to 24 are Young Carers.

University of Nottingham’s Dr Saul Becker said there were negative consequences to being a Young Carer.

Many of them receive limited opportunities in the work force, feel restricted in their friendships and have emotional, health and educational problems making it difficult for them to transition into adulthood.

Blue Care’s volunteer coordinator Fiona Walker described Ebony’s background as a “motivating factor” for her volunteering work ethic and with 201 volunteers under 25 years of age, Ebony “really stood out”.

Walker said Ebony was a bright and bubbly young woman who was reliable, trustworthy and had an amazing work ethic.

The Queensland Young Volunteer of the year will be announced on 1st October.