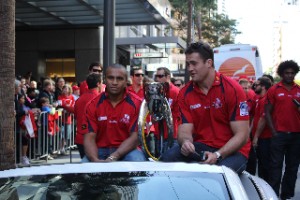 Captain James Horwill (pictured with final try-scorer Will Genia on his right) thanked the crowd of fans who turned out and who stuck with Queensland through the tough years.

“You’ve been amazing for the last couple of years,” he said.

“It makes a massive difference to all the boys so thank you for turning out today.”

The Premier, Lord Mayor and Minister for Sport joined in celebrations of the Reds’ first premiership in 16 years.

“They have re-ignited interest in rugby union around Queensland and Australia. They are our champions and today we honour them.”

Lord Mayor Graham Quirk handed the keys of the city to the team – the 32nd time Brisbane has given this symbolic award.

“The biggest honour Brisbane bestows as a city on any individual or group of individuals is to present the keys of the city,” Cr Quirk said.

“Just two years ago this side was really struggling and to come back from the brink in the way that they have is an absolute credit to them as individuals and as a team,” he said.