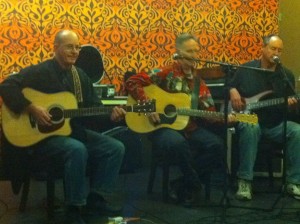 Established by the French Government in 1982, Fete de la Musique is celebrated on June 21 every year in more than 110 countries and 450 cities around the world hosting a range of musical genres including classical, country, rock, opera, latin, world and hip hop.

This was Brisbane’s fourth year in the event, which gives local musicians the opportunity to showcase their talent for free in local parks, shops and non-traditional venues such as museums and hospitals.

An international charter links amateurs and professionals to perform in indoor and outdoor venues to encourage local talent and cultural diversity.

The trio Rob Stewart, Tony Mockeridge and Michael Tully presented a collaboration of country, blues and folk ballads fused with a touch of soft-rock songs.

Lead singer and guitarist Tony Mockeridge kept the audience entertained with his sense-of-humour and acknowledgement of listeners.

“It is lovely to be in the company of attractive company,” he said.

He incorporated a sense-of-humour and interaction with the audience between acts.

Their light-hearted, warm performance with songs titled, “Child of her Time” and “Sunshine” were songs based on the Australian culture and the beautiful sunny weather in Queensland.

They were among hundreds of performing artists across the Brisbane CBD and Fortitude Valley who participated in the festival.