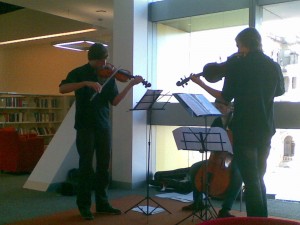 The two-year-old trio is made up of Queensland Conservatorium students – twin 19-year-old brothers Michael Poulton on violin and Phillip Poulton on viola and Camilla Tafra, 20, on cello.

Michael said it was the first time they have been involved in the festival.

“It’s a such a wonderful opportunity. Classical music can have a snob factor and this brings the music to the people,” he said.

The organisers chose the space where the musicians were to perform and Camilla felt apprehensive about playing in the quiet setting in the library.

“It felt a little intrusive. The gaps between the pieces are a bit tricky,” she said.

The trio has just returned from a two-week music school and tour of the cities of New York, Los Angeles and Toronto, where they learned the difference between classical and baroque music.

The global one-day Fête de la Musique was founded in 1982 in France with the aim of taking music into public spaces to expose and celebrate the common human language of music.