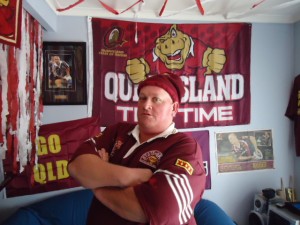 Walking up the driveway, any lingering doubts about whether I’d arrived at the right address are immediately dispelled by the visually arresting maroon that smothers the front window of Stephen Swarts’ residence.

I step through the doorway where I’m greeted by Swart, who’s donned his (what I imagine to be) characteristic Queensland jersey and beanie. We shake hands and the conversation instantly turns to his display.

From the door to the extremities of the room, no piece of furniture or wall space has been left untouched; from team flags (the largest I’ve ever seen) and photo’s stretching across the wall, to the maroon and white streamers flanking the windows and canopying the ceiling above.

Even the kitchen has been thematically decorated, with maroon ribbons and “TRY” signs arcing the doorway, across the sink and even on each level of the staircase.

“It all took about three weeks to get done,” he said.

The Alexandra Hills resident has put an enormous amount of effort into what can only be described as a thorough showcasing of State of Origin memorabilia that spans three decades.

“I’ve been collecting all of this since the late ’80s,” he said.

Swarts has been collecting prodigiously since then, but has only started putting it out on display for the past eight years, with the collection vastly growing each year.

Swarts talks me through the items that adorn his house, pointing out a particularly poignant photo of Alan Langer walking up to him amidst the crowd, during his last-ever game – the picture clearly cementing Swart’s passion of rugby league.

“It was the biggest moment of my life,” he beamed.

The avid league fan is no stranger to the incredulous looks, with his family and friends all in agreement that it’s the best State of Origin display they’ve seen.

“I get a lot of reactions from people, yeah. It just adds to the atmosphere,” he said.

Swarts is hoping to attract Channel 9’s The Footy Show to his themed abode in time for the deciding matchon 6th July.

Swarts is hoping for a solid win over NSW this year in order to round off Darren Lockyer’s football career.