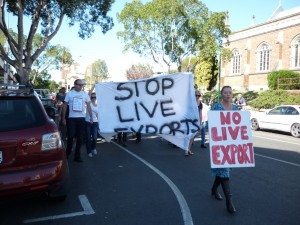 Protesters gathered in Ipswich CBD on Saturday to demand the federal government ban live export of cattle to Indonesia, with chants of “We want live exports banned” and “Shame on Gillard”.

“When we have exports it means less work for us. Our shifts sometimes get cut down to two or three days a week,” he said.

RSPCA representative Mr Michael Beatty said millions of dollars had been given by cattle growers to LiveCorp to improve the conditions in Indonesia but after 18 years nothing had been done.

“We believe in the right of any animal to be killed humanly,” he said.

Dr Petersen said Ipswich was the first to protest because the concerns of Ipswich are specific.

“We have one of the largest meat processing plants in the southern hemisphere, for us this is our local economy at stake,” she said.

Dr Petersen set up the Animal Welfare Society at the University of Queensland in 1994 to stamp out live export. She encouraged people to attend the national protest on June 18 at Parliament House in Brisbane.

One Response to “Meatworkers join rally against live cattle exports”