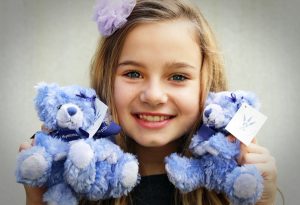 Brisbanites had the opportunity to add to their teddy bear collections this week, with lavender bears on sale to support the Leukaemia Foundation.

The bears and other lavender gifts were sold to support the annual Lavender for leukaemia, lymphoma and myeloma appeal, held every June.

Volunteers wearing lavender took to the streets throughout the city to sell the $8 bears, this year named “Lila” (pictured left, with Miranda).

Volunteer Emma Weiss, who has been involved in the appeal since its launch six years ago, estimated 150 bears had been sold at Central train station alone.

“Each year there is a new bear,” she said. “We notice that the same people come back each year. They collect the bears.”

The foundation’s chief executive, Peter Johnstone, joined the volunteers to sell bears in the city.

The non-for-profit Foundation provides emotional support, accommodation and practical assistance for those suffering from leukaemia.

“With 2000 Queenslanders expected to be diagnosed with a blood cancer this year, our services continue to be stretched to the limit,” Mr Johnstone said.

Jamie Meaclem, who was diagnosed with leukaemia early last year, says the Leukaemia Foundation provides invaluable support for the family.

“It’s not just money but the support,” he said. “They always come into the hospital and talk to people.

“[Their support] is not just for me – but for the other kids and their parents… They sent people to my school to educate them about leukaemia.”

To find out more or to make a donation, go to www.leukaemia.org.au.