Haunted by an image of atrocity 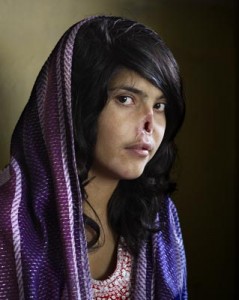 When you walk into a gallery you never expect to leave haunted by an image that you saw.

South African photographer Jodi Bieber captured the very confronting image of a disfigured Afghan girl who had both her ears and nose cut off as retribution for fleeing her husband’s home.

This photograph is so powerful in its simplicity, it not only filled me with emotion but it also captivated me with her sad and barbaric story.

As uncomfortable as the photograph made me feel, I found that I was drawn back to it because the image was so striking, but it also touched my heart.

Bibi Aisha is captured against a plain background, wearing her hair down, beneath a purple veil. She is sitting at a slight angle to the camera, so there is more emphasis on her disfigurement.

Her expression is blank, but her stare reflects someone who has been both physically and emotionally disfigured.

It is remarkable how an image like this can be so plain, yet so controversial.