The Dalai Lama greets a well-wisher in Brisbane

On the final leg of his Queensland visit, the Dalai Lama spoke to a crowd of thousands about happiness, compassion and overcoming adversity.

More than 5000 people gathered at Brisbane’s Riverstage, waiting eagerly in the hot sun to hear the thoughts of the Tibetan spiritual leader.

Greeted with a standing ovation, the Dalai Lama had everybody at ease when he stood before the crowd with his sun visor and sunglasses, joking of having a burnt head from the Queensland sun.

Retreating to the couch he was joined by ABC local radio’s Richard Fidler, who hosted the event, together with Ipswich mayor Paul Pisasale.

Holding the hands of both men he turned to the crowd and announced that they were “now three brothers”.

“Whenever I meet people, we are genuine brothers and sisters. At a human level, physically, mentally and emotionally, we are the same” he said.

The talk became more meaningful as he spoke of honesty and sincerity in our everyday lives.

Speaking to the youth in the audience, he told of an encounter he had with the Queen Mother and her thoughts on the changes in the world.

“When I asked her whether the world is getting better, worse or has stayed the same, without hesitation she said better.”

“She thought that the world had a better concept of human rights and the concept of self-determination.”

He highlighted the importance of communication and spoke of how the 20th century was one of bloodshed and one of violence. “The 21st century should be one of peace.”

“Make a more peaceful world, a more compassionate world- the responsibility is on your shoulders,” he said to the applause from the audience.

To conclude the talk and much to the delight of the audience, His Holiness happily answered their questions and offered his guidance.

Megan Turner of Ipswich choked back tears as she told the Dalai Lama about her struggle after surviving nine brain operations. 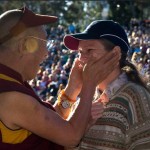 The Dalai Lama comforts Megan Turner after inviting her on stage

She spoke of her loneliness, poor memory, language difficulties and her deep admiration for him.

Rising from the couch he invited Mrs Turner on stage and gave her a warm hug, reminding her that she was not alone.

Members of the crowd openly wept and were moved by the gesture, prompting more deep emotional questions.

As he concluded, he chuckled and told the audience that he could not take their problems with him, but instead reminded them that there is always help available.

The Dalai Lama’s next stop is Perth on Sunday.