Councillors come to a halt over bollards 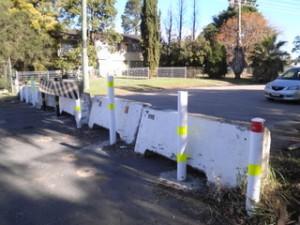 Brisbane councillors are at loggerheads over the future of bollards in the Brisbane suburb of Richlands.

A church wants bollards to slow down traffic, while motorists are driving around bollards on a nearby street.

Cr de Wit accused Cr Dick, the councillor for Richlands, of sitting on the fence while residents, business owners and the Serbian Orthodox Church argued over the bollards in Bandara Street.

She told Cr Dick to get some intestinal fortitude and to state his position – to relocate or to not relocate the bollards.

“As councillors there are times when you have got to be prepared to make a decision and take a stand. Well this one has been around and around,” Cr de Witt said.

The council has received a third petition from St Nicholas’ church to relocate the bollards – backed by professional assessment which cited increased traffic volume and risk of accident.

Previous petitions from the church had been rejected after consultation with residents and business owners, and traffic investigations by the council’s transport planning branch.

Cr de Witt said the preferred option was for a six months trial re-location of the bollards to outside the Serbian church if the majority of residents and business owners agreed and suggested Cr Dick do some door-knocking.

“If we could bring an end to this by having Cr Dick go out and do some work,“ Cr de Witt said.

Sean Barnes, a resident of Bandara St for eight years, believes moving the bollards will inconvenience many and benefit few.

Mr Barnes estimates an extra 15 minutes travel time each-way if the bollards are relocated and has produced a counter-petition.

“I’m a hard worker and I want it easy for me to go to work. I don’t want to make it harder on myself,” he told Newsbytes.

Cobra Equipment sales director George Nason said trucks were driven slowly and cars fit easily through one side of the bollards where a post has been knocked down with concrete moorings still attached.

“I think the bollards should be gone totally,” Mr Nason said.

He said the problem would be solved if the road was upgraded.

“Upgrade this road and then we don’t need any debate about bollards,” Cr Dick said.