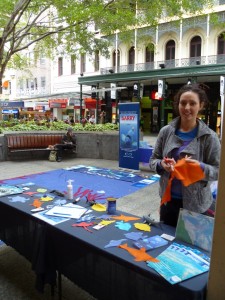 A petition to create the world’s largest marine Park in Australia’s Coral Sea has stirred controversy with claims the park would damage the nation’s fishing industry.

The Australian Marine Conservation Society (AMCS) has organised a petition calling for protection of marine life in the Coral Sea.

But the proposal has left many in the fishing industry worrying about the consequences if a marine park is created.

AMCS have collected 45,000 signatures and aim for a total of 50,000 before presenting it to federal Environment Minister Tony Burke.

As the only environment organisation dedicated to protection of the ocean, AMCS hopes today’s World Ocean Day events will help raise awareness in protecting and preserving the marine environment surrounding the Great Barrier Reef.

According to AMCS organiser Daisy Barham, less than one percent of the Coral Sea is currently protected and she argues that action needs to be taken now.

“Let’s protect it now while it’s not going to cost us a whole lot of money and whilst it’s still healthy,” she said.

“Why would you wait for it to get degraded by over fishing or mining and then try to protect it?”

She said government funding would solve the problem faced by the fishing industry.

“A lot of commercial fisheries are happy for the area to be protected as long as they receive from the federal government financial assistance to transition them out,” she said.

According to Commercial Fishing Supplies owner Dave Dawson this proposal would destroy the commercial fishing industry and livelihoods.

“There is no science to back any of their plans to create marine parks. To me it’s just political,” he said.

Mr Dawson believes this campaign is flawed as it protects fishing grounds yet imports fish from third world countries.

“The biggest hypocrisy of it all is that none of our fishery stocks are overfished. We are quite happy to lock up and protect all our sustainable fishing grounds, but by the same token import far worse quality seafood from little third world countries that are already overexploiting their resources while we are under exploiting ours.”

A review from the National Seafood Alliance says more than 70 percent of Australian seafood is imported.

Mr Dawson believes the real solution lies in having food security in the country.

“We should be feeding half the world and not importing 70 percent of our seafood.”

He said the plan would affect a range of people from numerous industries.

“This will affect contractors, mechanics, marine electricians, refrigerators, cabinet makers, fibre glass workers; boat building even right down to your little supermarkets – the flow on effects will be enormous.

“The skill set we will lose will just be incredible.”

He said that just by talking about the proposed Coral Sea marine park for the past two years has “affected me big time.”

This plan has left workers frustrated due to “unneeded hardship” and all they want is to be left in peace.

“For goodness sake leave us all alone.”

Research fellow Natalie Ban from Australian Research Council Centre of Excellence for Coral Reef Studies said it was always a trade-off to protect marine life and the cost of change.

She likened the marine life conservation to money in a bank account.

“It’s kind of like a bank account- if you take only a little bit then you are just taking the interest over time and the base of what you have remains the same. But if you take too much each time then you’re going to have less and less of an overall balance in your account.

“It’s the same with fish stock, if you have a healthy system that has lots of fish and you only take a little bit every time you go fishing then that will be sustainable over time. If you take a fair bit then you’re going to be depleting that piece of your bank account or that of fish stock over time.”

A study by the Centre estimated an annual management cost of $3 million, in addition to set-up costs.