City whitens up for winter festival 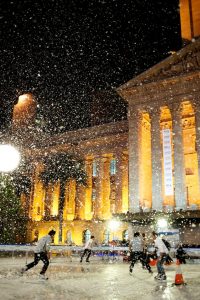 Following displays in Melbourne and Sydney, Brisbane’s King George Square is playing host to a myriad of different winter activities to give sub-tropical locals a taste of winter in colder climes.

Brisbanites have the opportunity to hire a pair of skates and step out onto the 900m² ice rink. They can also enjoy gourmet food from over 20 different countries.

First-time ice skater Melissa Wright was thrilled at the chance to skate.

“I had so much fun, I’m so happy they brought this festival to Brisbane, I never thought my first ice-skating experience would be in the middle of the city,” she said.

Irene Smith a mother of two said: “I think this Winter Festival is a great idea, the kids and I had so much fun. The ticket and skate hire was a little expensive but it was great way to spend time with the family.”

In addition to the ice-skating, the festival will also be putting on themed nights and ice-skating performances.