‘Some days are diamonds’ – helping the handicapped 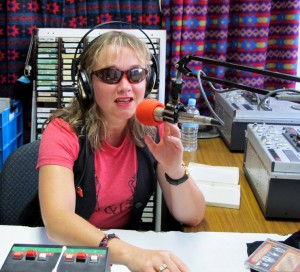 Sandwiched between a stairwell and office space in a narrow Brisbane side street are the modest, compact headquarters of community radio station for the print handicapped (4RPH).

Catering to the vision impaired, the station was started by philanthropic Greek businessman, the late Spero Dragona. The first broadcast of an hour-long newspaper reading aired in 1982.

Hidden behind the darkened façade of the recessed entrance, the spirit of volunteerism for which Queenslanders are renowned flourishes.

From small beginnings and with limited federal government funding, 4RPH relies on a pool of some 60 volunteers and a small group of sponsors to broadcast over a 24-hour period.

Clad in his trademark shorts and long socks, dedicated volunteer station manager and retired ABC TV broadcast technician Ed Richardson cheerfully endorses the sign on the door of the ‘on air’ studio – “ All egos to be left outside.”

“In 1990 we got our fully commercial AM transmitter of 5kW from station B105; we are still using the same transmitter which is located at Tingalpa,” says Ed, who has been associated with 4RPH since 1991 and currently works a seven-day week.

“We have an agreement with the BBC world service for a satellite feed to cover the 10pm to 6am slot, and broadcast 16 hours of locally produced radio content daily.“

Present volunteers are drawn from all walks of society and include teachers, a retired priest, housewives, ex-radio personnel, accountants and solicitors, many of whom volunteer for the joy of “giving back”.

Judy Bowtell has severe retinopathy, a result of vision impairment at birth, and volunteers twice weekly to assist the only paid staff member, Nadine Collings, with administrative duties.

Only able to distinguish vague outlines and colours and having overcome several health problems with a sense of humour, Judy readily says she really feels part of the 4RPH team.

“It is a very easygoing place, everything is casual but very organised and the people are nice and friendly.” 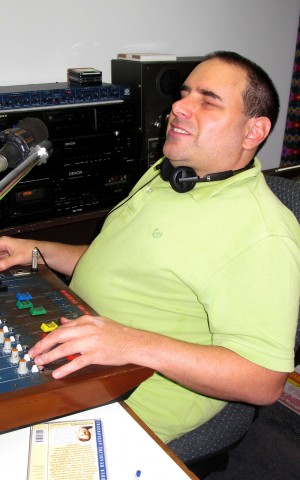 Incumbent QRPH Board president, audio engineer Steve “Richo” Richardson, was born blind and has been involved with 4RPH for almost 20 years.

With a love of music, he plays piano and drums in his spare time and is tasked with auditions, doing on-air shifts as an announcer as well as training and production.

Describing himself as “someone who is a bit moody at times”, Richo says he cares about what he does and about the people in his life.

“This station allows people to access information from newspapers, books and magazines and meets a need in the community for those who cannot access the information via computer.”

He is a talented mimic who had me laughing uncontrollably as he perfectly imitated the highly accented words of an aggrieved, self important person.

Recording engineer Steve Sparrow of Spartek Recording Studio is another local personality who is vision impaired and has a long association with 4RPH.

He is an award winning, professional entertainer and recording artist who sings and plays guitar and has performed internationally, on cruise ships and in numerous pubs and clubs.

Steve has a regular slot at 4RPH on a Thursday doing production.

Another talented, cheerful and patient announcer and producer is qualified IT whizz Paul Price. Blind since birth, he works voluntarily at the station in between his paid call centre employment.

Richo taught Paul the intricacies of both on-air panel operation work and production.

Although blinded in a tragic incident 20 years ago, her world is defined by colour.

A self-confessed fitness junkie, she has represented Australia internationally at the Paralympics in judo and competed nationally in swimming for the disabled, while producing a book and doing motivational speaking.

Through perseverance and guts, Desiree mastered the skills Ed patiently taught her to become an announcer and expertly feels her way around the broadcast console as she rewinds the instruction cassettes Ed records for her.

With her spunky brand of humour and sass, she has made the Friday afternoon slot her own.

“Generally, the blind community is a shy one but that is not the case here; there is heaps of cheek and you get a fair bit of it back,” says Ed with a chuckle.

With about 30,000 listeners at peak times, radio 4RPH modestly fills a niche in broadcasting with its warm heart.

The station is held together through the likes of selfless volunteers such as Ed. If you are interested in volunteering at the station, please see the website www.uqconnect.net/4rph for further information and contact details.

3 Responses to “‘Some days are diamonds’ – helping the handicapped”