Hundreds of women marched through the streets of Brisbane yesterday to protest against victim-blaming and sexual assault at Australia’s first “Slutwalk”.

The march followed Candian protests when a policeman told university students not to “dress like sluts” if they wanted to avoid sexual assault. The students created Slutwalk, which has quickly became a global phenomenon.

One of the Brisbane Slutwalk organisers and member of the Australian Sex Party Anne Watson said the main message for the event was that “sexual assault is never okay”.

“Through today we hope to remove the culture of victim blaming, and to empower women to stand up for their sexuality,” she said.

The crowd, mainly women in their 20s and 30s, took up the chant: “However we dress, where ever we go, YES means YES and NO means NO”. 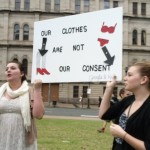 Protestor Kathryn Durace, who wore a bright pink dress, heels and fishnet stockings, said: “It’s often the assumption that if a woman has been sexually assaulted, it is because she brought it on herself, but that is totally beside the point- rape is not on.”

For student Rebecca Lane, attending Slutwalk was her chance to protest against the label “slut” and body image.

“No matter what we wear it should never condone sexual assault. A woman should feel safe wearing whatever she feels comfortable in,” she said.

Some people at the march, like Mel Camp, did not agree with everything said.

“I agree that sexual assault is not on, but I believe that you must always dress appropriately. If you want to wear something revealing then you can only expect to get attention back,” she said.

Slutwalk Australia is planning marches in Canberra on June 4, Adelaide June 11, Darwin June 12 and in Sydney on June 13.